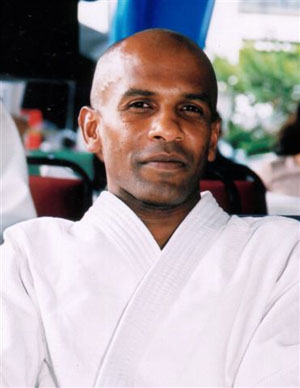 Thambu sensei started Aikido in 1972 at the age of 11 under the tutorlage of the Thamby Rajah Sensei, who is also known as the father of Malyasian Aikido. During His Teenage years, he leant Kendo, and Shindomuso ryu Jodo. In 1978 he acheived the rank of shodan at the mere age of 19, and soon after flew to Australia to attend university. During his student years, he tried Aikikai and jujutsu, but he soon realised that it wasnt suited, he opened the first Yoshinakn dojo in Australia.

In 1983 Thambu sensei flew to Japan for the first time to futher his Aikido and visits Yoshinkan Hombu dojo to stay there as a live in student. From the return from Japan, he opened the first full time Yoshinkan dojo on St George’s Road named “Aikido Shudokan”.

Since 1983, Thambu sensei has visited Japan many times and in 1993 he would recieve his 5th dan under the examination of Soke Gozo Shioda and becomes the youngest non-Japanese Yoshinkan Aikidoka to recieve the rank. Also he was the last person to be tested under Gozo Shioda after his death in 1994.

As a cheif instuructor of Aikido Shudokan, Thambu shihan has over 40 years of Aikido experience. During that time he has met many different instructors form all over the world. Gozo Shioda, Inoue Kyouichi, Chida Tsutomu, Takeno Takafumi… also there are some names are not only from Aikido, but from different martial arts, from Jodo, kendo, and Iaido. The names of which are now world renown such as Obata Toshiro from Shinkendo, Don Drager from Shindo muso ryu jodo, Nariyama shihan from Tomki Aikido…

Thambu shihan has been working contunuously throughout the years to spread the Aikido throughout the world. For his efforts in 1997, he was awarded to join the Hall of Fame and recieved the “Aikido Instructor of the Year” by the Blitz Magazine. And Not long after, in 2001 he was awarded for his 6th Dan in Aikido.

Every year the Aikido Shudokan receives a constant stream of international visitors and Thambu Shihan continues to teach, train and demonstrate his aikido worldwide.

During one of these memorable visits in 2005, Thambu Shihan was presented with the Tokubetsu Embu Sho (an award given for the best demonstration), at the 50th All Japan Yoshinkan Aikido Demonstration.

Through his wealth of experience, Thambu Shihan has made aikido accessible to the security industry, where he has combined his martial training with years of security and crowd control experience in a very unique manner. In addition, Thambu Shihan’s ability to apply his aikido training in a variety of ways has made him a much sought after public speaker at training seminars for corporate and local government sectors.

In acknowledgment for his dedication to Aikido, Thambu Shihan was awarded his seventh dan by Shioda Yasuhisa Kancho, the current head of Yoshinkan Aikido in December 2007 and was promoted to the rank of “Shihan” in October 2008. Joe Thambu Shihan is the first non-Japanese person ever to receive this title from the Yoshinkan Hombu dojo. It is a very apt and well-deserved title.

To this present day, Thambu Shihan continues to spread the art of Aikido worldwide and has been instrumental in the development of Yoshinkan Aikido throughout South-east Asia, the UK, Poland, Czech Republic and the Netherlands.