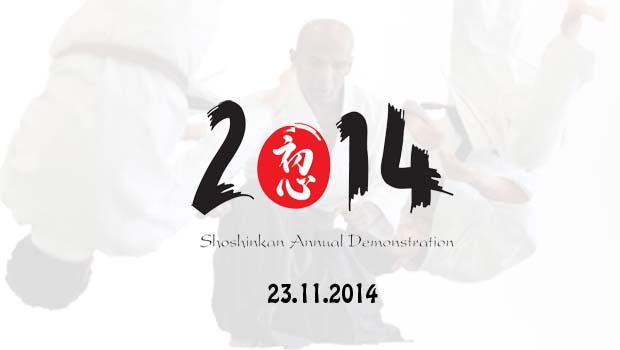 2013 Aikido Shoshinkan 3rd Annual Demonstration was held on the 24th November 2014 in Nottingham on cold afternoon. This year we had this exciting event held on last day of a 4 day long seminar with Joe Thambu Shihan (Australia) and Mark Hadiarja sensei (Indonesia). It was very auspicious event to have our chief instructor to take part in our demonstration, as well as countless instructors from around the world. It was a shorter demonstration compared to the previous years as the demonstration was performed only by the senior students. But this made our demonstration even more sharp, focused and dynamic… Everyone who took part showed great skills they have been practicing on the mat over the last month. Here are some of the great demonstrations from everyone.

Kihon Dosa Renzoku （基本動作連続） : performed by all the senior students from Aikido Shoshinkan Nottingham and Derby. Kihon Dosa Renzoku is a set of basic movements practiced continuously. This is ususually practiced and demonstrated by the Senshusei/Tokyo Riot Police Course students in the annual Yoshinkan demonstration in Japan.

Aikiken (合気剣) Demonstration : performed by Stephen Flaherty, Robin Ward, Justin Saunders and Thinesh Krishnamoorthy from Aikido Shoshinkan Nottingham. Aikido comesfrom the days of the Samurai to defend oneself from the sword. This demonstration shows the development of the art of the sword to the art of Aikido. This is practiced regularly in the classes to learn the timing and focus of the aikido.

Kankyuwaza （緩急技）：performed by students from Ryushinkan Dojo in London headed by Sarah Cullerne Sensei (4th Dan). This is a demonstration fast and slow, showing the slow basic technique practiced in Aikido, to fast and more practical application of the same technique. This is one of the key demonstrations of Yoshinkan Aikido.

Sarah Cullerne Sensei Demonstration：Sarah Cullerne Sensei has been practicing Aikido for over 25 years and one of the senior female instructors of Aikido Shudokan organisation. With a wealth of knowledge, there is a great focus, grace and flare in her Aikido. And she is a very sought after instructor in UK. Her ukes are : Azi Malik, and James Sanders. She is performing a Ushiro Ryotemochi Jiyuwaza (Rear hand grab) and Kata mochi jiyuwaza (Shoulder grab).

Mark Hadiarja Sensei Demonstration：Uke : Mateusz Cendrowski, Marcin Woijeck and Justin Saunders, . Mark Hadiarja Sensei (4th Dan) is the chief instructor of Aikido Shoshinkan Indonesia. He has started training under Joe Thambu Shihan in 1998, and have been training Aikido ever since. He is also one of the senior instructors of the organisation and very sought after instructor. He is displaying a range of jiyuwaza front kneeling, standing from various attacks.