On the 19th of October 2009, we started what was going to be a phenomenal experience! Not only did we get to visit Malaysia (which is absolutely fantastic) we got to train with some of the most gifted Sensei in Yoshinkan Aikido in the world. 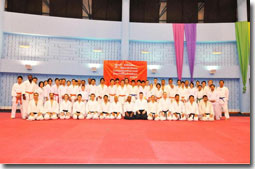 The 3rd Aikido Shudokan international Gasshuku started on the 21st of October and finished on the 25th of October. This large international aikido get-together featured Joe Thambu Shihan (7th Dan) and Sensei Jon Marshall (5th Dan). Aikido students from all over the world flew to Malaysia to train and partake in an amazing atmosphere created by all.

Needless to say that the level of training was demanding but still extremely enjoyable (even in that humidity!). In addition to being instructed by Sensei Joe Thambu and Sensei Jon Marshall, we also received instruction from Sensei Paul Chapman, Sensei Micheal Pabiasz and Sensei Mark Hadiarja. On the 22nd of Oct we had the privilege of watching the grading of some of Sensei Ramlan’s students. Well done to all who graded!! 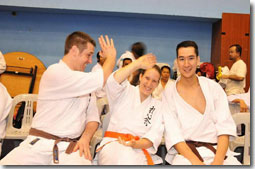 On the Friday, the training finished early and some of us decided to take advantage of the night life in Malaysia. We visited the Central Market and Chinatown. We even managed to barter and get some pretty good bargains!!

Saturday brought a whole day of training. We worked on our ukemi and had some more focussed training sessions on various aspects of aikido. In the evening, after a hard days training was the 3rd Aikido Shudokan International Demonstration. Although I have seen many demonstrations over the internet, nothing can prepare you for the sheer jaw dropping feats you will witness in a live aikido demonstration. I could not believe my eyes; I was thoroughly impressed by the level of skills from all who participated in the 3rd Aikido Shudokan International Demonstration. I went home buzzing that evening! 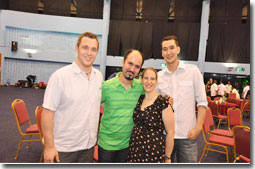 Sunday, the final day of training; at this point I felt exhausted but still raring to train and see what is in store for us. Once again, all of the Sensei have surpassed my expectations with their level of knowledge and skill in the art of Aikido.

Five o’clock hits – we have made it, and are absolutely grateful to all of the instructors that have taken time out of their lives to come and instruct us on a shared passion.

Obviously, a seminar would not be complete without a farewell dinner! Sunday night was dedicated to exactly that. We got to see a Silat demonstration, some traditional Malay dancing and experienced the delightful hospitability of Sensei Ramlan and his students. The food was great, the entertainment was fantastic and the company was priceless.

I have enjoyed every minutes of my time in Malaysia and I would not think twice about repeating this amazing experience!