The name ‘Yoshinkan’ is composed of three characters, meaning ‘Hall for Fostering Spirit’.

“Gozo Shioda, the ‘little giant’ of Aikido named for his diminutive height and formidable technical ability, was one of the most outstanding teachers of Aikido, living or dead.”

“Anyone who had the privilege of seeing him in action effortlessly flooring opponents at least twice his size, with the precision and timing of true mastery, could not fail to witness the graceful power of Aikido.” Paul Wildish (1998) 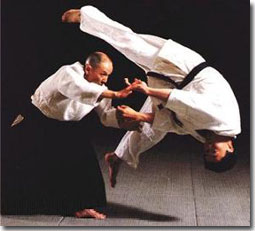 Soke Shioda Gozo Sensei was born in Shinjuku, Tokyo, in 1915. His father, Shioda Seiichi was a prominent pediatrician and medical academic. It was Shioda Seiichi who encouraged his son to take up various forms of exercise.

As a consequence, Shioda Gozo practiced kendo, gymnastics and then Judo as a youth.

It was in the art of judo where Soke Shioda Gozo excelled, having reached the level of third dan by the time he had reached his mid-teens.

A turning point in his life came at age 18, when his father sent him to the Kobukan to study under Ueshiba Sensei, a man rumoured to be ‘invincible’. On his first visit to the Kobukan, Soke Gozo Shioda was invited by O’Sensei to use his Judo skills to try and throw him.

Launching an attack, sceptical of his opponent’s ability, Shioda Gozo found himself flying through the air, hitting the ground, head first, having no idea how he got there.

The very next day, May 24, 1932, the young Shioda joined the Kobukan and commenced his aikido career under Ueshiba Sensei. He left the Kobukan in 1941 when he had finished his university studies. The advent of the second World war prevented any practice of aikido.

After the war, Shioda Gozo peformed his first public demonstration in 1954. 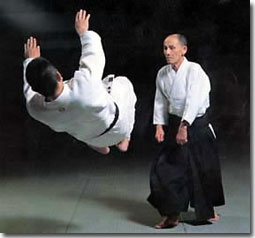 In front of an audience of 15,000, he was awarded the grand prize for best demonstration. Within a year after the demonstration, Soke Shioda Gozo was heading his own aikido dojo, the Yoshinkan, named after his father’s original dojo.

Soke Shioda Gozo was awarded his 9th dan by Ueshiba Morihei Sensei in 1961. His outstanding contribution to the promotion of Japanese Martial arts in general and Aikido in particular was further acknowledged by the honorary award of tenth dan by the International Martial arts Federation in 1984, along with the title of Meijin or Grand master. 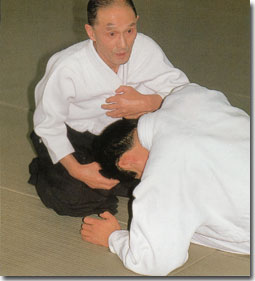 Soke Shioda Gozo died in 1994, leaving an organisation which has expanded all over Japan, the America’s, Europe, Australia, New Zealand and South East Asia.

Soke Shioda Gozo was convinced that through the silent language of Aikido, all differences between peoples and between cultures disappear, making peace and a harmonious co-existence a reality rather than an ideal.

As a style of Aikido, Yoshinkan is more akin to the prewar Aiki Budo techniques taught by O'Sensei, and therefore also generally closer to aikijujutsu than those styles of Aikido developed post-war.

The unusual emphasis placed on correct form rather than correct flow and timing further contributes to its image as a "hard" style. However, the merit of such terms as "hard" and "soft" is generally believed to lie in the superficial level of describing a style's "feel", rather than saying anything about the heart of the style itself.

Shioda Sensei formed the Yoshinkan style of Aikido because he felt that there needed to be greater consistency in the training process for students, so he created a structured method in which beginning students would learn the foundation techniques.

The feeling for an ichi (number 1) technique is that you go with the pull and for ni (number 2) you divert or pivot away from the push.

Yoshinkan Aikido has some 150 kihon waza (lit. "basic techniques"), which are practised repeatedly. Proficiency in these enable the student to master the remaining ones, which total some 3000 overall. The syllabus contains no weapons forms, although they are practised as an adjunct to the open hand techniques. Like many styles of aikido, Yoshinkan eschews competition; instead, it emphasises self defence applications.