When you first walk into a traditional Yoshinkan Aikido dojo, you will notice that at the front of the dojo are two portraits; the one on the left is of Morihei Ueshiba (commonly called ‘O’Sensei’ meaning ‘Great Teacher’) who was the founder of Aikido and to his right is a picture of Gozo Shioda (commonly called ‘Kancho’ meaning ‘Head of the House’) who was a direct student of O’Sensei and founded the Yoshinkan style of Aikido that we study. 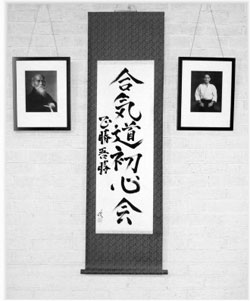 This is referred to as the ‘Shomen’ which literally means ‘front’.

When first stepping onto and when you last leave the mat, it is customary to bow to the Shomen. The bow should be a kneeling bow called ‘seiza rei’.

Again, this is a Japanese custom and has no religious significance whatsoever. The bow is a gesture of greeting and of respect.

We also formally open and close each class facing the shomen; students line up according to rank, highest rank starting to the right of the Shomen and moving down to the left, and the students sit in ‘seiza’, the traditional Japanese kneeling posture. The ‘Sensei’ or ‘teacher’ then enters the mat and sits in seiza in front of and facing the Shomen.

The student who called out the warm up exercises, generally a senior student, then calls the command ‘Shomen ni rei’ which means to bow to the Shomen. This is a mark of respect and a way of thanking O’Sensei and Kancho for developing Aikido. He/she then calls the command ‘Sensei ni rei’ at which point the students bow to the Sensei, who has turned in seiza to now face the students. This is to signify respect and thanks for taking the time to instruct us in the ways of Aikido.

The Shomen is considered special or sacred (in the secular sense), and should be treated as such. For example, it is considered very rude to leave training bags, shoes, weapons, etc. at the front of the dojo along the Shomen wall. As the Shomen contains the portraits of the founders, both of whom are deceased, leaving a pair of shoes near these would be similar to leaving your shoes on someone’s grave.

All of these behaviours are done out of respect for culture, the founders of Aikido, and are also a great way to train yourself in controlling your actions and maintaining awareness of your surroundings; all essential tools in good Aikido.