It was in November last year that we went to the Jacques Payet Shihan seminar in High Wycombe. It has been a while since Sensei Andy asked me to write an article about it, so my apologies to Sensei for the delay, but at least it’s given me the opportunity to fully reflect on the seminar.

I started thinking about this article by reading through some of the feedback from others who trained on the day.

“The one thing that struck me was the very strong themes running through all of the comments. It would appear that everybody who attended is in awe of Sensei Payet’s ability to effortlessly dominate and control his uke. That’s not to dismiss them lightly either.

There were some sizeable guys called up to uke. I seem to remember all of them shaking with effort and turning so red in the face they looked fit to burst. But at the same time showing an expression of utter amazement and surprise as they were clearly giving everything they had, yet still were being controlled with the greatest of ease.

Seeing feats like this, its possible to understand why some people claim that aikido is staged or faked. However, all the uke were more than willing to tell you that simply was not the case.”

“The whole seminar focused on a single theme; the ‘secret’ to Sensei Payet’s apparent superhuman strength! In reality this was just a demonstration of perfect balance. Nothing secret, nothing cunning, just the application of good, basic principles. I think it says a lot about Sensei Payet as a teacher and the breadth of knowledge he has of aikido, for him to be able to conduct an entire days seminar centred entirely around one concept.”

“I thought I had a good understanding of the key elements within kamae and was doing quite well at putting those into practice. However, in simple physical terms it would seem that when I think I’ve got my hips squared off, actually I haven’t and they need to come round further. Having had time to let that seminar sink in, I think what I’ve learned from Sensei Payet runs far deeper than that.”

In Aikido, we very quickly come to learn that the techniques that we practice are not necessarily practical. But we all eventually understand that we’re learning concepts, even if at the time we don’t completely comprehend the concept that we’re learning. I think its fair to say that in the past my understanding and appreciation of this has been on a rather micro scale. However seeing Sensei Payet demonstrating balance and kamae at the seminar has given me a macro appreciation of the difference between techniques and concepts. Its certainly helped me to realise that the ultimate goal as an aikidoka is to not need techniques. The cruel irony of the situation is that there is no way to reach this point without a thorough understanding of the concepts that only come from a thorough understanding of the techniques. I think this is very similar to something I’ve heard Joe Thambu Shihan say before about “learn the technique, master the technique, forget the technique”.

On the Tuesday after the seminar, I was fortunate enough to be invited down to London to train under Sensei Payet in a small class environment. I’ve now been on the receiving end of Sensei Payet’s technique and although it feels counter-intuitive, I can’t argue with what I’ve experienced first hand. I found myself pushing as hard as I could against Sensei Payet’s kamae but felt absolutely no resistance. But despite my effort and the lack of resistance I was unable to affect his posture.

We spent the evening trying to put these ideas into practice just as we had in the seminar on the Saturday. There were brief fleeting moments when it felt like I was just starting to get the tiniest hint of these concepts to work. I think given the difference in experience between myself and Sensei Payet, this is perhaps the most I could hope for. I imagine over time that such insights of what is possible will become more frequent, more consistent and more controllable. However it is only possible to aim for such things after seeing that they are achievable.

I know Sensei Payet has been studying aikido for a very long time, I don’t suspect that I’ll ever be able to get to his level but then aikido is not about the destination, it is about the journey. What Sensei Payet has given me is a compass bearing to be able to follow. While I might never travel that far, I find it very reassuring to be able to see the destination and at least know that my journey’s heading in the right direction. 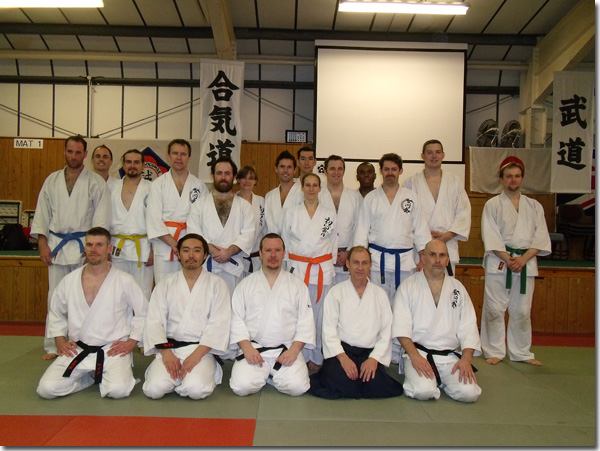